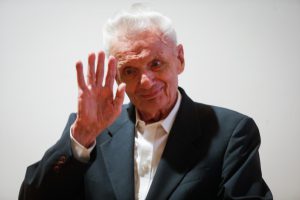 At the opening of the Transparent exhibition, the part of Prešeren Award by Miki Mustra in MSUM (Museum of contemporary art) at his 90th birthday

The author of those folk creations is Miki Muster, with no doubt one of the greatest makers and drawers of picture books, comics, and animated series on Slovenian and European scale.

Our best author of comic books and animation movies was a peaceful man, focused, with reserved, pleasant manners and neat appearance, lovely conversation partner, whose shallow words were foreign. He was down to earth and just enough talkative person. His smile was soothing, unobtrusive and pleasant. That is how Miki Muster was.

He was born on 22. November 1925 in Murska Sobota. He spent his early childhood in Krmelj, where his father worked as a first medical doctor in miner’s hospital. He finished first grade of primary school there, but finished it in Ljubljana. After finishing a gymnasium, he enrolled to Faculty of Arts in Ljubljana, where he finished to study as a sculpturer. From year 1952 – 1973, he was employed as a journalist of Slovenian reporter in newspaper company TT (Tedenska Tribuna), from 1st January 1974 then starts working as a freelance artist. From year 1973 – 1990, he successfully worked as an animator in Germany. We recognize him as a pioneer of Slovenian comics and one of most successful artists in the field of comic books and cartoons / animated movies on European scale. He spent his last years in Center for elderly people Notranje Gorice, where he passed away in 2018, 92 years old. 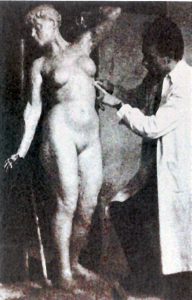 Miki Muster in the construction of the statue

He started his comic book career already in student years, since he was deeply impressed by seeing animation movie as a child: “I remember; we still lived in Krmelj, and I was maybe seven years old, when we went to the cinema in Ljubljana. Before movie there saw a cartoon – some devils burning fire and jumping around. That was my first encounter with animation movie, and it stayed forever in my memory,” remembers Muster.

When Muster started to draw, only Disney was known as a reference. Muster got in touch with his works already as a child. One day he watched his cartoon and after that, all of his thoughts were united to recreate something similar. He explains it by himself: “I think, that was in 1938, when I wasn’t even 13 yet. In Ljubljana they played animated feature film Snow White and the Seven Dwarfs. I was poisoned. I could dream only about, how I could also create animated movies. Every piece of paper, all borders of school notebooks were drawn with dwarfs.”

This is how he discovered Disney’s style and soon mastered it. However, Muster did not copy, he would just take his viewpoint on how characters should feel. He thinks about it so: “The magic of Disney’s characters is that they are not human. He would humanize objects and animals and give them appealing shape. This is why they are more popular than realistic human figures, despite the fact, they are being drawn. He gave animals human personality, for each person he would find animal, that represents his character. A human can identify himself easier with an animal. We know that from childhood years.” 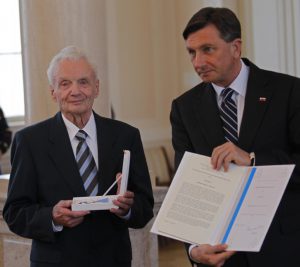 Muster’s drawing has become more mature with years. The personality of his heroes became more defined and got new shapes. He graduated from sculpture, but he was always interested in comic books. He always wanted to study animation movie, but had no chance for that. The closest to animation movie was study of sculpture.

“For a cartoon you need a feeling for a third dimension and sculpture is study of motion, where three dimensions apply. The character rotates in such way, that it has to be captured from all sides.”

Also during sculpture study, the thought for an animated movie didn’t give him a break. “Because there was no sufficient literature at that time, as well nobody in Europe worked on it, I had no one to advise me or teach me something. Therefore, I went experimenting myself. Years and years of hard labour were needed to yield some results. I had to discover things all myself, as well there was no materials at that time, we wouldn’t even have paper.”

Gradually he gained clear recognition. At his crafting he changed feather pen for a brush, with which he gained flexibility and by comic book needed softness. Everyone who saw his drawings, comic book or drawing book, knew immediately – that is Miki Muster.

When I was a child, I dreamed of entertaining children, generations of children. And I think I’ve made it. I have one wish: if you have unfulfilled childhood dreams, my wish is for them to come true, like mine did.

First character that Miki brought to life was definitely Zvitorepec (Trickster). He was drawing The adventures of Trickster without interruption for the whole twenty one years. “I tried to create Slovenian comic. I searched for a hero from our fairy tales. In them, the most common animal is female cunning fox, and I turned it to male fox Trickster, my hero.” Later other who heroes Lakotnik (Hungerly) and Trdonja (Hardie) joined as well. This unforgettable trinity becomes the central happening in all of Muster’s stories, which were 40 altogether. 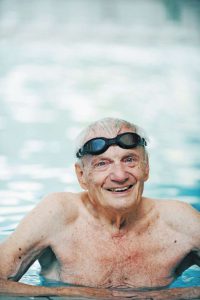 At the same time, Miki Muster has worked also on animation movie. Exactly this Trickster was the first hero, which made his first two, three steps with the help of his pencil. After first trials there were also first orders for animation movies. Among firsts was the company Viba film from Ljubljana, which ordered many 30-minute movies. These movies were: Puščica (The Arrow), Zimska zgodba (Winter Story) and Kurir Nejček (Courier Nejchek). From the year 1967 Muster dedicated his time entirely to television cartoon movies – commercials. Such pioneer work Muster remembers this way: “We didn’t know sound synchronisation at that time and we broadcasted speech, music, sound effects live on air. In sound recording studio, we had a crowd with anchor guy, me with a tape recorder and props, with which I created noise and other sounds, plus some other people. Drawn commercial was short and sometimes taped together from more than fifty pieces of film. We were lucky, because film never tore apart at the live screening. There was a lot of enthusiasm, inertia and happiness.”

This way around 380 animated commercials were produced in the years between 1967 – 1990, among most popular were Cik Cak bunnies, Šumi (candies Visoki C), retail store Mercator, Kolinska (Viki krema, Čunga Lunga), Podravka (Medolino and soups), Medex (honey), Fructal double A, Dana and Jelovica (Ne bo vam uspelo / You won’t make it). Beside this, he worked also for other regular clients, such as Elan (ski equipment), Aero (chemical shop), Emo (pots), Termika and others.

The wish for research and creation of real featured animation movie brought him abroad, where he started working on animation series in the year 1973 as independent artist at Bavaria Film in Munich. When he met, in the middle of 70′, Guillermo Mordillo, humourist and caricaturist, a series of 400 animated movies was produced with a total length of almost 300 minutes. This series had tremendous success and was played all over the world. Muster’s – Mordillo’s cartoons were bought by television studios from thirty countries, but despite that, you will be searching Muster’s name in credits for nothing, because Mordillo as character designer, and Manfred Schmidt as producer, took all the credits. With similar success Muster animated movies of Nick Knatterton, based on same named comic book of Manfred Schmidt. 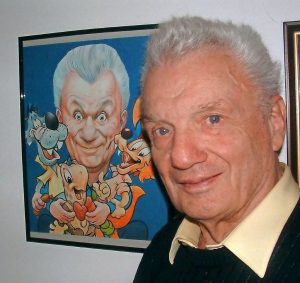 Miki Muster worked in Germany until 1990. In that time he created over 600 minutes of animation movie. Mordillo series (300 minutes), series of 21 shorts Oma bitte kommen (105 minutes), series about detective Nick Knatterton (200 minutes) and Knax series for children about saving money (20 minutes), made for Deutsche Sparkasse. “Together, in this time, I have created for over ten hours of animated movies, which is on average around seven seconds per day. I worked everything myself. From scripts, animations, copying and painting backgrounds. Only coloring and recording was done by somebody else. Next to that, I drew from five to ten animated commercials each year for RTV Ljubljana, I drew also some comics for the German clients.”

The drawing books, that Miki Muster drew after adopted stories of the world well-known artists, partially after original stories of Slovenian writers (one of them he wrote himself), were published around ten years as feuilleton in daily newspaper Slovenski poročevalec (Slovenian Reporter) from 1955 on. Some of them were later once or twice printed in book version.

Apart from all of this, of course, the comic stories were created, that Miki Muster wrote and drew in the period from 1952 – 1973, when he was employed as a journalist for the Slovenian Reporter, at the newspaper company TT (Tedenska tribuna/Weekly Tribune). They were published in the first post-war illustrated Slovene weekly newspaper PPP (Polet’s images and tales), which began to emerge in 1952, as well in the TT newspaper. 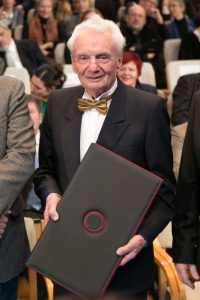 All stories were reprinted at least once. For the first time as individual stories as notebooks, then as collected works in eight books, which ranged from 200 to 470 pages, the next time as an anniversary edition of the author’s 80th anniversary of birth, this time the only time in A4 format and the last time as a complete and chronologically arranged collection of eleven books. In the sixties, several stories were reprinted by the Trieste’s Novi list, some of Maribor’s Večer, and some by Dolenjski list. Translations were also prepared in Hungarian, German, Italian and Croatian, but were not successful in the market.

Miki Muster, the best and the most successful Slovenian author of comics and animated movies, did not receive many awards for his work in the past because he never participated in special “official” meetings of illustrator associations and he was always a lonely horseman who was creating away from others. In 1978, the Yugoslav Association of Ninth Art Club established the Andrija Maurović Prize for comics achievements. The first one was received by Miki Muster for his life work. At the ceremony they wrote: “MIKI MUSTER, as the most outstanding Slovenian author of graphic literature, as an author who, in the Disney’s tradition of caricaturistic animal comics, created unique quality achievements especially in the earlier period, from which the type of comics, both in terms of drawing integrity and after scriptwriting, between the foundations of the Slovene and Yugoslav comics, and at the same time one of the classics of the European ninth art.” In 2000 Miki Muster received an Academy award called Viktor for his life achievements and work, and the Municipality of Ljubljana awarded him in 2003 with the recognition of the city of Ljubljana. In 2014, the President of the State awarded him with a Silver Order as a merit for top pioneering work in the field of Slovene animated movies and comics.

In 2015 Prešeren Fund awarded to Miki Muster the Prešeren Prize for Lifetime Achievement. After taking the prize, he was short, as he said, he said everything: “When I was a child, I dreamed of entertaining children, generations of children. And I think I’ve made it. I have one wish: if you have unfulfilled childhood dreams, my wish is for them to come true, like mine did.”